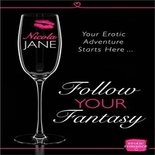 At my writer’s group last night (The Madrid Writer’s Club) we used Vanity Fair’s Proust questionnaire to interview a character. Since I’ve been struggling a bit to get into the follow up to Follow Your Fantasy, I used one of the characters from that – Giselle, a high class escort – as she is key in the next book.

You can see my answers below but the most interesting thing about this technique is what an easy way into the character it is. Not only do you understand better the traits you’ve already given them, but you find yourself fleshing them out, speaking in their voice. It’s almost effortless.

I think we think writing has to be hard work (and it is!) but it doesn’t have to all be hard and it isn’t any less worthwhile when it comes easy. So, as a way out of Writer’s Block or even as a way to create a completely new character, stop sweating and just ask them questions. It seems as if imaginary people are just as compelled to talk about themselves as the rest of us!

1 What is your most marked characteristic?

2 What is the quality you like most in a man?

3 What is the quality you like most in a woman?

I don’t have time for women.

4 What do you most value in your friends?

I just said I don’t have time for – make that patience and interest in – women. Men pay me to be their friends so #2

5What is the trait you most deplore in yourself?

I’m too generous if I let myself so I try not to.

6 What is your favourite occupation?

The one I’d have if I could earn as much doing it instead.

7 What is your idea of perfect happiness?

8 What do you regard as the lowest depth of human misery?

One I don’t have to come back from.

10 Who are your favourite writers?

You think I don’t read, right? That I spend all my money on Louboutin shoes?

11 Who are your favourite poets?

The joke hasn’t gotten old yet?

12 Who is your favourite hero of fiction?

[I intended this answer to be some obscure literary reference that in effect gives the answer to 10 and reveals that she is very well read. Unfortunately I am not as well read as Giselle so struggled to offer one. However Heathcliff might work as a secondary answer.]

13 Who is your favorite heroine of fiction?

14 Who are your favourite composers?

15 Who are your favourite painters?

16 What are your favourite names?

What ever you want it to be; The one my Dad called me when I was still his little girl.

17 What is is that you most dislike?

Since I mastered knotting a cherry stalk with my tongue – none.

20 What is your current state of mind?

Better to die standing up than to live on your knees.

The questionnaire helped me find details that added to the character I’ve got so far – a hard faced, scornful, sexy escort who doesn’t give anything away, doesn’t make small talk, but has had occasional flashes of more companionable warmth.

To develop Giselle for a second book, she’s going to have to start revealing more about herself – I think unintentionally in less guarded moments – and these I have the glimmerings of here. Even if I don’t use all of them in the book, it’s enough that I know them. So the liking for Walt Disney [fairy tale complex] but the ironic self awareness of the Pretty woman answer; John Denver (I’m thinking Annie’s Song and Country Roads); the suggested breakdown of the relationship with her father,  perhaps after he discovered her job?

A fifteen minute exercise with a massive pay off.