One more** date of the nice-enough-to-not-remember-a-single-thing-about-it-half-an-hour-after-it-finished variety.

This wouldn’t have merited a post but something he did at the end awakened something in me. Something long dormant – at least since the last one of these I went on.

Something that cannot be tamed by any man.

Something that burns and drives me wild.

Something I have to release….

Yes, this one doesn’t even warrant passionate scorn.

What was it? He asked for feedback at the “Nice to meet you/ You too” parting of the ways.

So, you want to meet again? You had a good time? You enjoyed? Everything was OK? 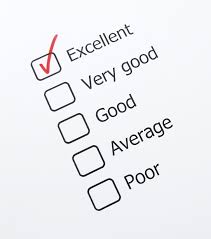 Maybe this is partly, partly, down to the linguistic difficulties at the awkward entry and exit points of a pre-date meet up. People can fluff this bit and babble past the place where the full stop would be in their mother tongue.  I hope it’s that. As what can it really achieve? No way am I going to tell the truth whether I really liked or was numbly indifferent to the guy. And, presumably, if it had gone stars in their eyes well, we would both have known it so no question needed.

I asked (nicely, humorously, ego preservingly) if he wanted me to write a report and said that OK Cupid (the site I use) should offer a feedback service or something like Linked In. Which got me thinking, long after whathisname had gone  off to buy socks and brown envelopes, this could be really helpful in OKC.

So looks, clothes, conversation could be categorised rather than rated since my tastes and anyone else’s differ so widely that a 9 for me is a 2 for you. And then some more binary categories like:

Then we could  categorise and rate dates  like Amazon’s  Other Customers Bought function. “If you liked the date with A, you might like the date with B”. There’d be no scoring or place to just bitch and attempt to destroy that bastard that dumped you so no other woman will touch him, but just a way to pass on information that might help them meet someone that’s actually right for them.

So, in that spirit here is his feedback form.

Conversation: Books/publishing, other cities in Spain, his job, Mayor of Madrid, ridiculous Spanish laws and restrictions making self employment and having own company difficult. (I learned something in this part).

If you want me to set you up, drop me a line.

** There are a string of posts about internet dates I’ve been on but they’re temporarily off the blog for the moment. Just until the lawsuit is settled.

2 comments on “Rate your date”

This entry was posted on September 11, 2013 by Nicola in Dating and tagged first date, internet dating, OK Cupid, pre date.