Back when I was a wholesome restaurant reviewer for Time Out Istanbul, I also wrote this article about sex and food at the request of the Editor at the time, Michael Merriam. I keep saying it wasn’t my main writing intention to get into erotica but here it was bubbling away under the surface six years ago so maybe it was where the path was leading after all. They had the internet then Mum/boss/squeamish friends so I swear this was all the result of research and imagination.

If you’re of the age where sex has become, to quote a charming Turkish expression, ‘like eating in the same restaurant everyday’, you probably remember the original 9 ½ Weeks.  But the chances are that now you don’t share a fridge with your parents and could, if your kitchen is fully equipped, act it out for yourself.

I’m not sure you should spoil the eroticism your youth bestowed upon the infamous food scene by re-watching it.  Maturity has taught you that glace cherries belong in the 80s, waiting for jelly to set would kill the spontaneity and honey would get stuck in your hair.

The licking of the flaccid pasta spiral, the milk ‘money shot’ and the fizzy water he ejaculates between her legs before they get down to it is more titillating in the telling than the watching but in case you don’t believe me here’s the scene that launched a thousand ice-cubes.

The idea does persist once born.

Food to get in the mood for sex.

It’s no surprise the two are so easily intertwined since we use the same words for both.  Before eating or sex you hunger.  Wanting a lot of it is having a big appetite. Sexual tension simmers and reaches boiling point.  Afterwards you’re satisfied. Getting bored with it? Spice things up.

Adding extra ingredients to your sex life suggests two main categories – substitutes and sensation enhancers.  Substitutes are the edibles that spring most readily to mind.  I mean, who doesn’t think about blow jobs when eating bananas, right?

The greengrocer’s is full of phallic stand-ins but if a purple patlıcan [aubergine] is a bit intimidating for your first time, think cucumbers, bananas, carrots, courgettes.  Sucuk [Turkish sausage like chorizo] might look the right shape and size but there is something distinctly less sexy about meat.

Animal meat that is.

Or maybe I’ve just been deterred by an urban myth that really, really happened to my friend’s boyfriend’s friend in high school involving a frozen sausage, a rapidly defrosted sausage and a trip to the hospital.

Smaller things like cherry tomatoes, olives, cherries, shelled nuts and strawberries could be passed from mouth to mouth, then from mouth to wherever imagination leads (some journeys should really not be attempted in reverse), or used as nature’s own love beads.  Put them in a condom, tie it in a knot, slip them in and pull them out at varying speeds at the point of orgasm.

A whole new way to lose your cherry.

So that’s things to put in, what about to put things into? The soft wetness of a cantaloupe melon or a jumbo sized jar of warmed Nutella is almost as good as the real thing with the added bonus of lickability.  Or, hands up who can think of an alternative use for a pineapple ring? Nibble it off, suck up the juices.  Not the cheapest of winter fruits but, for the budget conscious or amply endowed, there’s always simit [Turkish bagel shaped bread, cheap and the hole is bigger – you get what I meant].

For the genuinely peckish, eat out while dining in with a meze body buffet.

Cooling yoghurt, tingly ezme, salty cheese, wet hummus, stuffed vine leaves.  Even a relatively innocent start of simply feeding morsels to each other can quickly turn into ‘Oops! Did that fall down your shirt/ trousers? Waste not, want not!’  Time to abandon good table manners, play with your food, put your elbows where you like, eat with your fingers and slurp noisily.

Anything that can be poured, smeared, massaged or dribbled should be lavished on all areas of the body that want to be touched, licked or gently bitten. A brilliant way of directing your partner to areas he or she neglects. Vary the temperatures and textures as much as your pantry allows.  Hot melted chocolate as a contrast with cold ice-cream; rough textures like peanut butter versus the smoothness of whipped cream. 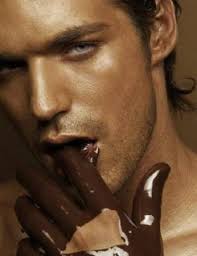 Champagne, long the sexy drink despite its monastic roots, is still an obvious choice. Coke is too teenage, sparkling wine will make you look cheap, but Perrier is an acceptably classy alcohol substitute.  Open the bottle, letting the foam spill over your partner, so it fizzes on the skin.  Popping the cork in their eye is generally considered bad form.

Dinner served, the true food-lover knows the best recipe needs spices.  Even just kissing after eating raw ginger or chilli will surprise and heighten sensation for your partner, especially if blindfolded.

Nipples are a good place to start getting experimental. Try applying menthol gel strips and licking them ‘til they dissolve for minty cool heat.  That tingly feeling in the back of your nose that comes with wasabi? You get the idea.

Some words of warning before you get out the plastic sheets and act out your own Sex and the Kitchen:

This is going to be messy.  If you’re too house-proud to cope, go to a hotel.

One that you never, ever intend going back to.

This entry was posted on September 26, 2013 by Nicola in Erotica, Writing and tagged sex, Time Out, Turkish food.